Civilizing the Greeks, Romans,Europe and Ending The Dark Ages

The first civilized Europeans were the Greeks, who were chiefly civilized by the Africans of the Nile Valley." The Greeks transmitted this culture to the Romans, who finally lost it, bringing on a dark age of five hundred years. Civilization was restored to Europe when another group of Africans, the Moors, brought this Dark Age to an End.

When the topic of the Moorish influence in Europe is being discussed, one of the first questions that arises is, what race were they?
As early as the Middle Ages, “Moors were commonly viewed as being mostly black or very swarthy, and hence the word is often used for negro,” according to the Oxford English Dictionary.
Author and historian Chancellor Williams said “the original Moors, like the original Egyptians, were black Africans.”
The 16th century English playwright William Shakespeare used the word Moor as a synonym for African. His contemporary Christopher Marlowe also used African and Moor interchangeably.
Arab writers further buttress the black identity of the Moors.  The powerful Moorish Emperor Yusuf ben-Tachfin is described by an Arab chronicler as “a brown man with wooly hair.”
Black soldiers, specifically identified as Moors, were actively recruited by Rome, and served in Britain, France, Switzerland, Austria, Hungary, Poland, and Romania.  St. Maurice, patron saint of medieval Europe, was only one of many black soldiers and officers under the employ of the Roman Empire.
Although generations of Spanish rulers have tried to expunge this era from the historical record, recent archeology and scholarship now shed fresh light on the Moors who flourished in Al-Andalus for more than 700 years – from 711 AD until 1492.  The Moorish advances in mathematics, astronomy, art, and agriculture helped propel Europe out of the Dark Ages and into the Renaissance.
Source:  Stewartsynopsis.com/moors_in_europe.htm 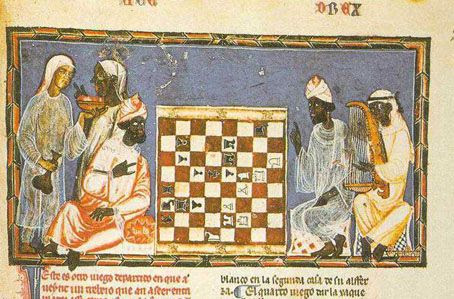 Universal Education
The Moors brought enormous learning to Spain that over centuries would percolate through the rest of Europe.
The intellectual achievements of the Moors in Spain had a lasting effect; education was universal in Moorish Spain, while in Christian Europe, 99 percent of the population was illiterate, and even kings could neither read nor write. At a time when Europe had only two universities, the Moors had seventeen, located in Almeria, Cordova, Granada, Juen, Malaga, Seville, and Toledo.
In the 10th and 11th centuries, public libraries in Europe were non-existent, while Moorish Spain could boast of more than 70, including one in Cordova that housed hundreds of thousands of manuscripts. Universities in Paris and Oxford were established after visits by scholars to Moorish Spain.
It was this system of education, taken to Europe by the Moors, that seeded the European Renaissance and brought the continent out of the 1,000 years of intellectual and physical gloom of the Middle Ages.
Source: Blackhistorystudies.com/resources/resources/15-facts-on-the-moors-in-spain/
Culturespain.com/2012/03/02/what-did-the-moors-do-for-us/ 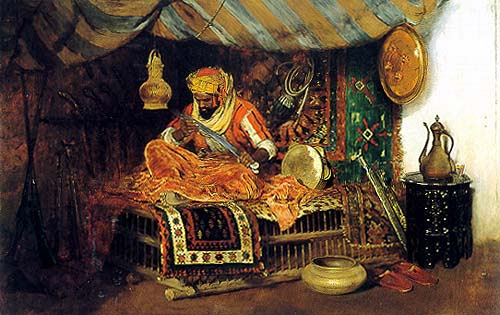 Fashion and Hygiene
Abu l-Hasan Ali Ibn Nafi – who was also known as Ziryab (black singing bird in Arabic) and Pájaro Negro (blackbird) in Spanish- was a polymath, with knowledge in astronomy, geography, meteorology, botanics, cosmetics, culinary art and fashion. He is known for starting a vogue by changing clothes according to the weather and season. He also suggested different clothing for mornings, afternoons and evenings.
He created a deodorant to eliminate bad odors, promoted morning and evening baths, and emphasized  maintaining personal hygiene. Ziryab is believed to have invented an early toothpaste, which he popularized throughout Islamic Iberia – primarily in Spain.
He made fashionable shaving among men and set new haircut trends. Royalty used to wash their hair with rosewater, but Ziryab introduced salt and fragrant oils to improve the hair’s condition.
Source: Wikipedia.org/wiki/Ziryab 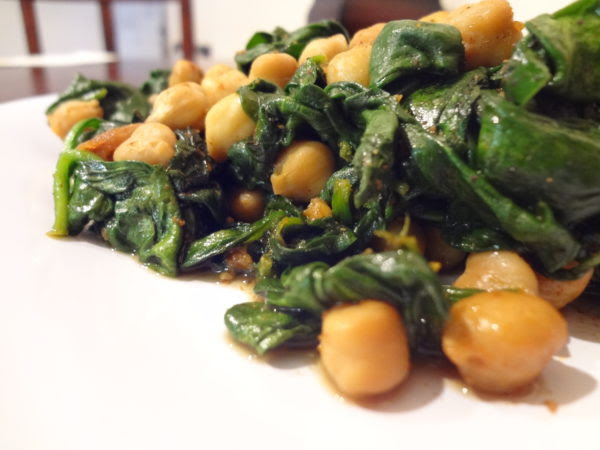 Cuisine
Ziryab was also an arbiter of culinary fashion and taste, and revolutionized the local cuisine by introducing new fruit and vegetables such as asparagus, and by initiating the three-course meal served on leathern tablecloths. He insisted that meals should be served in three separate courses consisting of soup, the main course, and dessert.
He also introduced the use of crystal as a container for drinks, which was more effective than metal. Prior to his time, food was served plainly on platters on bare tables, as was the case with the Romans.
In general, the Moors introduced many new crops including the orange, lemon, peach, apricot, fig, sugar cane, dates, ginger and pomegranate as well as saffron, cotton, silk and rice,  all of which remain prominent in Spain today.
Source: Wikipedia.org/wiki/Ziryab

Urban Utilities: Street lights, Hospitals and Public Baths
In the 10th Century, Cordoba was not just the capital of Al Andalus (Moorish Spain) but also one of the most important cities in the world, rivaling Baghdad and Constantinople.  It boasted a population of 500,000 (200,000 more than now) and had street lighting, fifty hospitals with running water, three hundred public baths, five hundred mosques and seventy libraries – one of which held over 500,000 books.
The Moorish achievement in hydraulic engineering was outstanding. They constructed an aqueduct, that conveyed water from the mountains to the city through lead pipes.
All of this, at a time when London had a largely illiterate population of around 20,000 and had forgotten the technical advances of the Romans some 600 hundred years before. Paved and lighted streets did not appear in London or Paris for hundreds of years later.
Source:  Houseofnubian.com/IBS/SimpleCat/product/ASP/product-id/315094.html 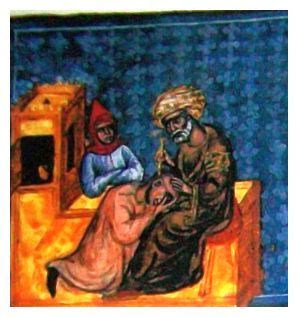 Medicine
The “father of modern surgery,” Abu al-Quasim (Al Zahrawi), was a Moor who was born in Cordoba. During a practice that lasted fifty years, he developed a range of innovative and precise surgical instruments, while writing a text book that was to be a cornerstone of Western medical training for the next 500 years.
Source: Culturespain.com 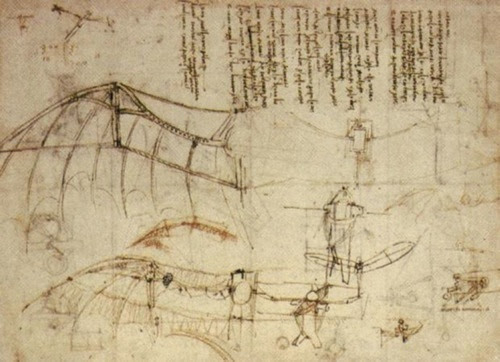 Human Flight
The Moors’ scientific curiosity extended to flight when polymath Ibn Firnas made the first scientific attempt to fly in a controlled manner, in 875 A.D.  His attempt evidently worked, although the landing was less successful.
Source: Culturespain.com

Advance Agriculture Techniques
Under the Moors, Spain was introduced to new food crops such as rice, hard wheat, cotton, oranges, lemons, sugar and cotton. More importantly, along with these foodstuffs came an intimate knowledge of irrigation and cultivation of crops. The Moors also taught the Europeans how to store grain for up to 100 years and built underground grain silos.
Source: Houseofnubian.com 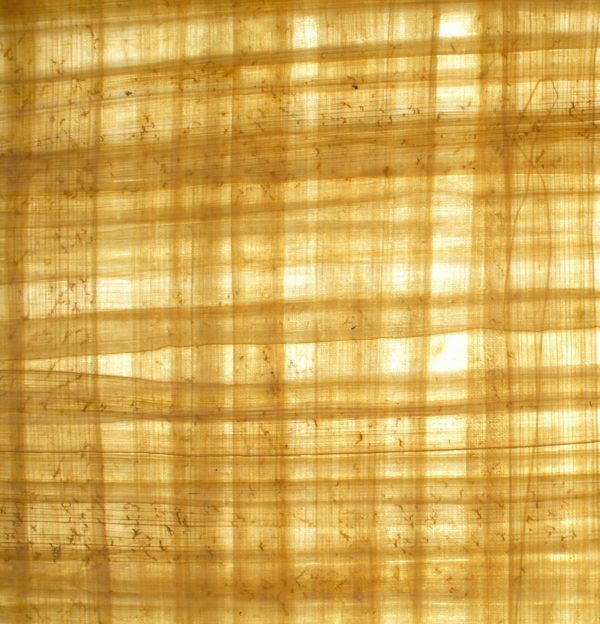 Paper Making
Paper making was brought to Spain by the Moors, allowing the growth of libraries and, thereby, the accurate preservation and dispersal of knowledge – with Xativa, in Valencia, having the first paper factory in Europe.
Through the Moorish conquest of southern Spain, paper making first reached the Moorish parts of Spain in the 12th century. A paper mill is recorded at Fez in Morocco in 1100, and the first paper mill on the Spanish mainland is recorded at Xàtiva in 1151.
Source: Historyofinformation.com/expanded.php?id=266