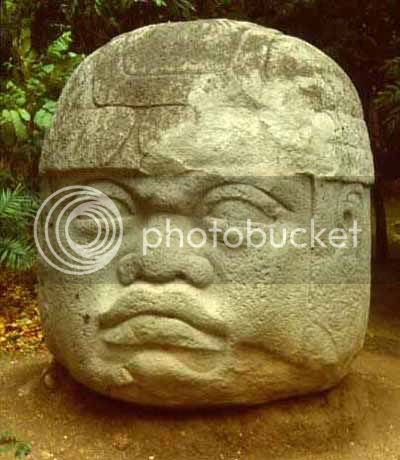 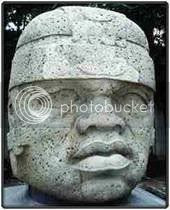 Contrary to popular belief, the Olmecs (Nuwbuns) were the first beings to colonize the . They came walked over here from the of (a country in southern which included Ethiopia/Axum, , and ) long ago. The Olmecs (Nuwbuns/Seed People) originally came to the before the continental drift (when all of continents were joined called "Pangaea").

They came millions of years ago to set up colonies in the . Science tries to hide the fact that they had dark skin, wooly hair, broad noses, etc. There were Africans. They are the original 9-Ether wooly haired descendants of the Anunnaqi Eloheem (the "angels" in Genesis who said "let us create man in our image and after our own likeness"). Initially, they came in search of more land and natural resources. The Aztecs (descendants of the Nuwbuns) gave them the name "Olmec" which means "dwellers of the rubber land’. They were called this because these Nuwbuns made rubber from the sap of the rubber tree, a native plant of . .

The Nuwbuns (Olmecs) were the Dogon tribe. They traveled far and wide establishing great empires around the world. Originally, they migrated from the Persian Gulf up into Sumer and setup 7 kingdoms:


Some stayed, while others migrated to the west to and setup 7 more kingdoms:

As mentioned before, they also migrated to the and settled down in what was known to them as "the land of the frogs". First, they went to South America and established a land they eventually called "Amexem" (The Americas).

There (in ) they dwelled until the 4th century, when some Chinese explorers under Hsu Shen came looking for more land. They came to the shores of () in 459 A.D. where they bumped into the Olmecs. They lived and interbred amongst each other producing what became known as "the Native Americans" (mistakenly called "Indians"). The lower land was called "Amexem" from the word "Hexian" (another name for Hsu-Shen). The word "" comes from "Amexem" and the word ’’’’ comes from the word "".

Eventually, The Olmecs gave the lower land (South America, Amexem) to these "Native Americans" and moved on to (frog land/North Amexem). They called this frog land "Utla" or "Atla" (meaning to vacate, to go somewhere for Vacation, to travel to another place). It became "Atlan" making it dual, signifying North and . later, the Greek historian Plato added "tis" to the end of "Atlan" to give us "Atlantis". Thus you have the origins of the word "".

As you can see, these Nuwbuns (Olmecs) are the ancestors of many races, including the Cushites, Hamites, Shemites, Phutites, Nubians, and the Native Americans. We, the seed people, are the creators of all of the races and nations that inhabit the Earth. is no exception. Don’t be fooled by the LIE that prior to slavery, there were no Africans in . This is the main lie that keeps us Nubians (descendants of the Nuwbuns) from claiming our sovereign nationality. The devil knows that as long as we don’t see ourselves as indigenous to , we will NEVER claim our birthrights, and forever be slaves!

notes from "Let’s Set the Record Straight" by Nayya Malachi Zodok York El and "They Came Before Columbus" by Ivan Van Sertima.